Our first Tai Chi class for our Seniors at the centre 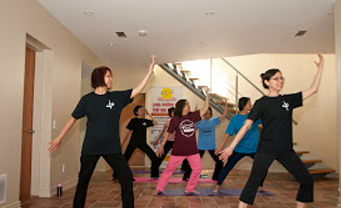 The benefits of this ancient Chinese form of exercise have been repeatedly demonstrated by a growing body of clinical evidence. Among the possible benefits:

Even if you think you’re out of shape, this is one form of exercise you can do. In fact, the Oregon Research Institute in Eugene recently conducted a study that found adults over 65 who had lowest fitness levels improved the most by doing tai chi twice a week.

What is Tai Chi?

There are many ways to translate and spell the words – Tai Chi, T’ai Chi, Taiji, Taijiquan, Tai Chi Chuan, and Taiji Qigong. (Qi is the Chinese word for “energy,” and gong means “exercise.”) But no matter how you spell it, the same principles underlie the practice: Focusing the mind on slow movement reduces stress and produces mental calm, while deep breathing and standing meditation focus consciousness, and restore energy and physical balance.

The practice is a mental and physical centering,” explains tai chi master Yang Yang, PhD, founder and director of the Center for Taiji and Qigong Studies in New York City, where he teaches what he terms Evidence Based Taiji.

“The relation between tai chi and qigong is often misunderstood. Qigong literally means to exercise/nurture one’s vital energy; it is a mind/body/spirit integrative practice,” Dr. Yang says. “Tai chi is actually one kind of qigong exercise: other fundamental qigong exercises (such as sitting and standing meditation) are essential components of traditional taiji training.”

The Power of Tai Chi

“Tai chi can not only reduce stress and depression, but also relieve pain, build strength, and improve cognitive function, perhaps even delaying dementia” says Peter M. Wayne, PhD, Director of Research at the Osher Center for Integrative Medicine, jointly based at the Harvard Medical School and Brigham and Women’s Hospital in Boston.

Studies show that among people with early dementia or mild cognitive impairment, exercises such as tai chi can have positive effects on cognitive performance and memory, says Dr. Wayne, who is co-author with Mark L. Fuerst of “The Harvard Medical School Guide to Tai Chi: 12 Weeks to a Healthy Body, Strong Heart & Sharp Mind.”

Tai chi benefits cancer survivors. “It does not cure cancer, but restores function, strength and energy, helps people deal with symptoms, and improves resiliency,” says Dr. Yang, who works with cancer patients at the Integrative Medicine Center of the Memorial Sloan-Kettering Cancer Center. In addition to reducing pain, it improves sleep, he adds.

Tai chi biggest benefit – and the one backed by the most evidence so far – is in its capacity to improve balance and prevent falls. “Tai chi strengthens weak muscles in legs and improves the ability of ankles to flex on uneven surfaces – and repeated movements improve reaction time. All of these help prevent falls,” Dr. Wayne says. According to Dr,. Yang, tai chi also significantly increases core strength, which is important for improving balance, and enhances our ability to use information from the inner ear that is a key aspect of maintaining balance.