After more than 4 years, including 2 years of isolation due to the COVID pandemic, we were reunited today May 1, 2022 to celebrate a major milestone of the Golden Age Village for the Elderly. Since the weather forecast mentioned it might rain this morning, my dear husband was determined to leave the house early to avoid the rain on the drive from Hamilton to Brampton. Old people often worry about things like that. By the time we arrived in the parking lot, it was shortly after 9am, just about two hours too early. We are probably Golden Age Village for the Elderly’s (GAVE) most enthusiastic and eager guests.

It was not raining yet, but the wind was cold. Looking across the small street to Academic Drive, the five-acre piece of land the City of Brampton provided to GAVE, looked so beautiful in the morning sun. The piece of land is located on the Flower City Community Campus, very close to downtown Brampton, across from 2 schools and a seniors centre. The land is ideal for the construction of a nursing home and long-term care. 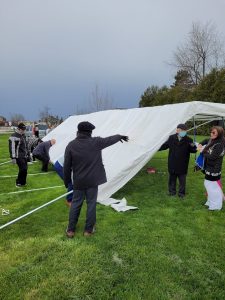 Sitting in the warm car, we were touched to see GAVE’s volunteers setting up tents, planting flags and spreading banners. The wind got stronger and stronger, and then the rain started to fall, yet everyone continued to work calmly in the middle of the vast empty land. Soon after, the trucks of the City of Brampton showed up with lots of chairs, long tables, platforms for the stage, a generator, and two huge blue umbrellas. A large tent and two small tents were also built by the GAVE volunteers, covering the neatly arranged tables and chairs. Around 10:30 am, we saw many groups arriving with food, fruits, coffee, and water, one after another. At exactly 11am, we left the car and walked across the street. We noticed a lot of our community were there even though it was still raining and the early May wind was still bitterly cold.

About 15-20 minutes later, all the seats in the tent were full, except for a few for guests from the government. There were also many young people standing outside the tents with their umbrellas. Before the ceremony at 12 noon, everyone was invited to drink coffee to warm their stomachs while enjoying the fun musical performances. 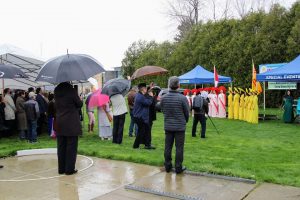 On a cold, rainy Sunday, we did not expect to see so many guests who were representing 3 levels of government, attending the Groundbreaking Ceremony to build the Tuoi Hac Village – a project of our small Vietnamese community. Present were 4 Ministers, if we remember correctly, Minister of Housing and Diversity and Inclusion, Minister of Seniors and Accessibility, Associate Minister of Mental Health and Addiction, and the Minister of Education, alongside the Mayors and Deputy Mayors of Brampton, members of the Brampton and Vaughan City Councils and Representatives. In addition, there are directors of the companies involved in the GAVE project including the consulting firms, the architects, construction firms, operations and finance companies, demonstrating a strong force behind the GAVE project. 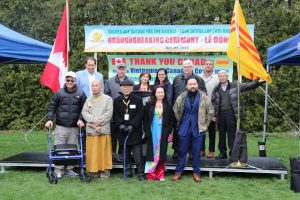 During the national anthems ceremony, we were moved to tears when we witnessed a group of 14 beautiful young ladies in traditional Vietnamese headpieces and ao dai with the symbols of the Canadian flag and the Republic of Vietnam flag. The ladies passionately sang the two national anthems while the cold wind brushed against their delicate silk Áo Dài. It was a good thing that right at the beginning of the ceremony, the rain suddenly stopped and the clouds disappeared to make way for a bright morning. It was truly a blessing. According to Vietnamese folk belief, if there is rain during important celebrations of life milestones, it is a good omen signaling that everything will be successful. We really hope that this will be true for GAVE. 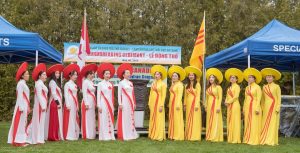 After greetings from the Chair, Venerable Thien Tam, and Vice Chair External Dr. Huynh Quynh, the guests from the governments also spoke. The Mayor of Brampton, in particularly, praised our community for our perseverance and determination, and especially Ms. Tanya, Secretary General of GAVE, who never backed down despite any obstacles. 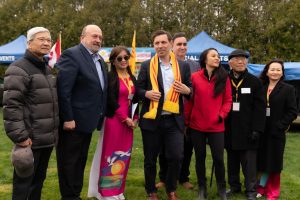 We, and possibly many others, really appreciated the statement from the Mayor of Brampton. We feel very lucky to have GAVE volunteers, Board of Directors, and people who are willing to contribute out of the kindness of their hearts to serve the community. 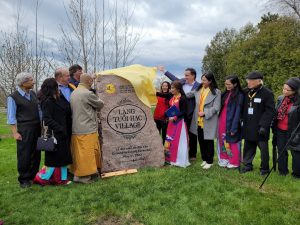 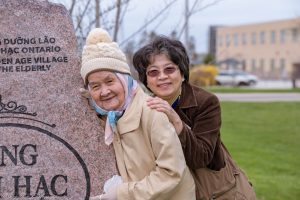 The most important and touching moment was when GAVE representatives and distinguished guests lifted the cover, revealing a large stone embossed with the GAVE sign – two cranes flying above yellow background and three red stripes, the flag of Southern Vietnam. The name Tuoi Hac Village is beautifully carved, with the date May 1, 2022. We did not go near the rock because it is surrounded by many people with cameras and camcorders. We were in no rush, as we know it will soon be our turn to take a photo with the beautiful largestone. We make room for the guests and representatives of associations to take turns using the shovel to dig the ground, symbolizing the construction of the nursing home for the community. Everyone, old and young, Vietnamese as well as other community members, looked very happy. 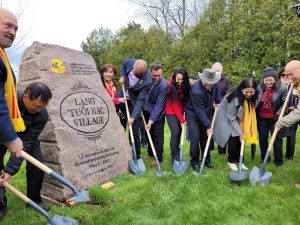 We remember in particular a young lovely boy, about 2-year-old, using the heavy shovel to dig the ground. Once done, he placed his small hand on the stone, as if to say, “I am finished with my duties now.” He was such an adorable young volunteer. 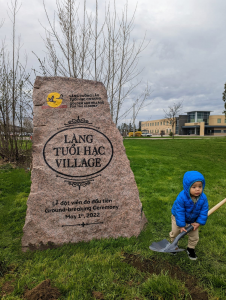 After the ceremony was complete, everyone had lunch with banh mi, Vietnamese red sticky rice, corn sticky rice, spring rolls, pate chaud, Vietnamese sticky rice dumplings, coconut jelly, creme brulee, grapes and sweet tangerines. At the front of the stage, we noticed a table with two beautiful cakes, one was decorated with colourful flowers, and the other to celebrate and represent the laying of the stone. While eating our food, the musical performances made the meal extra enjoyable. There were many incredible singers including: Thach Ha, Dien Nguyen, Mr. Kim, Bich Ngoc and others. They do not hesitate to sing and dance jubilantly while it’s raining!

Around 3pm, the rain became heavier, and many people were ready to leave. We see the city trucks return to pack up the tables, chairs and umbrellas. Witnessing the support from the city to the Vietnamese community made us reflect on how sometimes within our own community, there is a lack of support for each other. 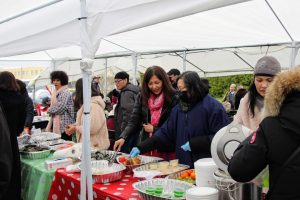 Returning to Hamilton in the pouring rain, my husband drove slowly as the weather made it difficult, yet we both felt overjoyed by what we witnessed today at the Groundbreaking Ceremony of GAVE. We remember we attended the annual GAVE Town Hall meeting, with the theme “Faith and Hope.” The hope has come true now, what remains in our hearts is faith.

We have faith that in the near future, our community will have a place where we can thrive.

From the bottom of our heart, we want to thank the Venerable Thich Thien Tam, the Board of Directors, and volunteers of GAVE, who dedicated effort, time, and money to give the Vietnamese community a place that would last for generations of Vietnamese families. This centre will help our community to carry our cultural practices and legacies for generations to come. 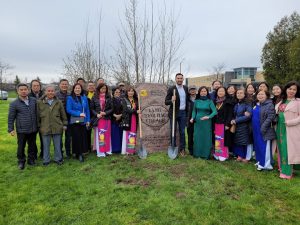